The Strafford County Democratic Committee mourns the passing of Caroline French and extends our deepest condolences to her many friends and family. 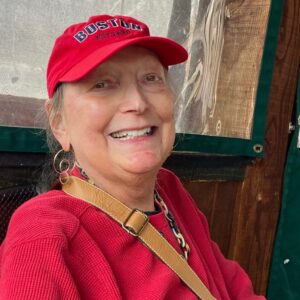 Caroline L. French, was a generous, opinionated, self-sufficient woman. She was well-read, an excellent connoisseur of art and antiques and a rabid Red Sox fan. Caroline grew up in the antiques business and engaged in it throughout her life. Caroline always enjoyed participating on social media, which she used to keep up with news, politics and friends.

A strong supporter of the Southern Poverty Law Center, Caroline reminded us that in the first half of the last century, the Ku Klux Klan was very strong here in the New Hampshire seacoast. Once, while pointing to a photograph of the 1963 March for Jobs and Freedom in Washington, D.C., where Dr. Rev. Martin Luther King, Jr. delivered his famous “I Have a Dream” speech, she said that, while you couldn’t see her in the picture, she was thrilled to be there.

Caroline was generous in giving, a mentor to many and was an excellent fund raiser. She held yard sales at her home on Dover Point, as well as art and antique auctions to raise money for charities and the Democratic party. Caroline not only supported, but volunteered at the Rollinsford Public Library, where she read to the younger children.

An avid fan of the Boston Red Sox, Caroline would embroider a circle with a line though it over the insignia of New York Yankees baseball caps. These she’d hand out to special friends sharing her fondness for the Boston team.

Caroline was passionate about politics. Often the driving force behind visibilities, canvasses, phone and mail campaigns, Caroline was an excellent organizer who worked with the Dover Democrats for years and served as a member of the executive board of the Strafford County Democratic Committee. Caroline worked enthusiastically for many Democratic campaigns, from presidential campaigns to local New Hampshire campaigns, including campaigns of Jackie Cilley and Mindi Messmer

Caroline was an original member of the Strafford County messaging committee, which developed the “Thank Democrats” bumper sticker campaign. Caroline herself paid to print the popular “Got potholes? Thank Republicans” bumper sticker.

Caroline was a tireless worker for Representative Shea-Porter over many elections. After the Dean campaign, Caroline and other Democratic women formed a luncheon group. The first campaign for Carol Shea-Porter to run for United States House of Representatives was born during one of those luncheons. Carol Shea-Porter’s campaign was successful – she served in the House for two consecutive terms, then two more non-consecutive terms before finally retiring.

On the presidential front, Caroline worked for many campaigns, including those of Howard Dean, President Obama, and Bernie Sanders. In 2003, while working on the Howard Dean campaign for president, Caroline lost her husband, Gordon. Caroline never forgot Dr. Dean’s kindness toward her during that difficult time.

Caroline will always be remembered by those who knew her as a generous, mercurial and indefatigable woman. She will be greatly missed. A celebration of life will be held on Saturday, July 23 at the Perrys’ at 380 Rollins Road, Rollinsford.